One of the Spamhaus Project's malware specialists has been dissecting GuLoader, attempting to analyze this tricky malware. They have taken time out from reverse engineering and sandbox detonations to share their findings…

GuLoader, or as it is also known, CloudEye, is a small VB5/6 downloader malware. Typically, it downloads Remote Access Tools (RATs) and Stealers, such as Agent Tesla, Arkei/Vidar, Formbook, Lokibot, Netwire, and Remcos, often (but not always), from Google Drive.

What’s so special about GuLoader?

GuLoader is notorious for its anti-virtual machine (anti-VM) tactics, i.e., thwarting any attempts for researchers to analyze it. In fact, it was so successful at evading analysis that, at one point, not even one of the most famous online sandboxes could detonate the malware successfully.

Utilizing a packer to swerve detection

GuLoader utilizes the Nullsoft Scriptable Install System (NSIS) packer to compress and encrypt its payload. The NSIS packer is a free, open-source tool commonly used to create Windows installers. However, it can also pack other types of files, such as executables. It is GuLoader’s use of the NSIS packer that makes it harder for antivirus programs to detect and remove the malware.

When GuLoader packs its payload, it first compresses the file using the NSIS packer, then encrypts the compressed file with a custom encryption algorithm. The encrypted file is then embedded into the GuLoader executable. When GuLoader is run, it decrypts and unpacks the payload, then executes it.

We all know that virtualization is a common way to improve infrastructure efficiency and reduce costs across the IT industry. However, attackers can abuse it to evade detection and launch attacks. Here are some of the ways GuLoader evades detection:

We’ve covered the basic overview; now brace yourselves as we get down and dirty looking under the hood of GuLoader.

How does Guloader resolve an API?

GuLoader uses a hashed technique to resolve an API call; it’s a modified version of djb2 – see the example below: 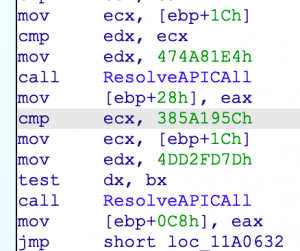 GuLoader uses these to make code more difficult to understand and reverse engineer. They work by making the code appear random or meaningless, making it harder for humans to understand what it does.

One of the most common obfuscation techniques is “opaque predicates“, which are Boolean expressions that always return true or false values. However, the value is not known beforehand, making it difficult to understand what it does. Opaque predicates are often used with other obfuscation techniques, such as code permutation, to make the code even more difficult to understand. 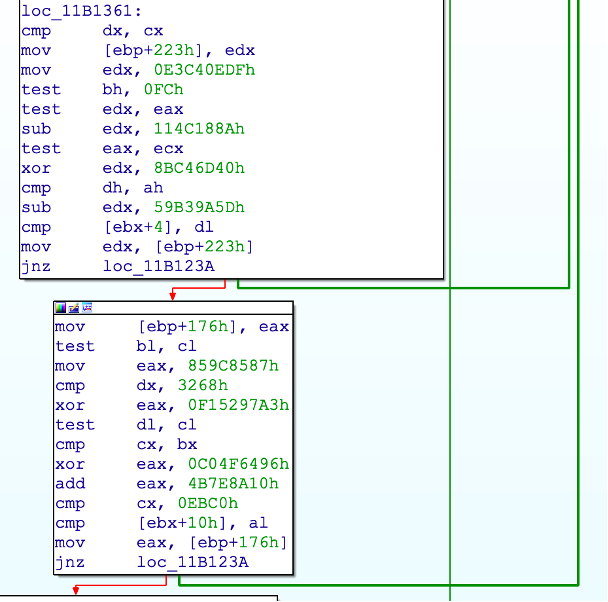 One interesting feature of GuLoader is how it manages to change the code flow during runtime. This is done using vectored exceptional handler (VEH), a software exception handling mechanism. A VEH can be used to intercept and handle exceptions generated by the operating system or running programs.

Initially, as the exception happens, _CONTEXTRECORD structure is checked for the presence of hardware registers, i.e., the x86 debug registers: 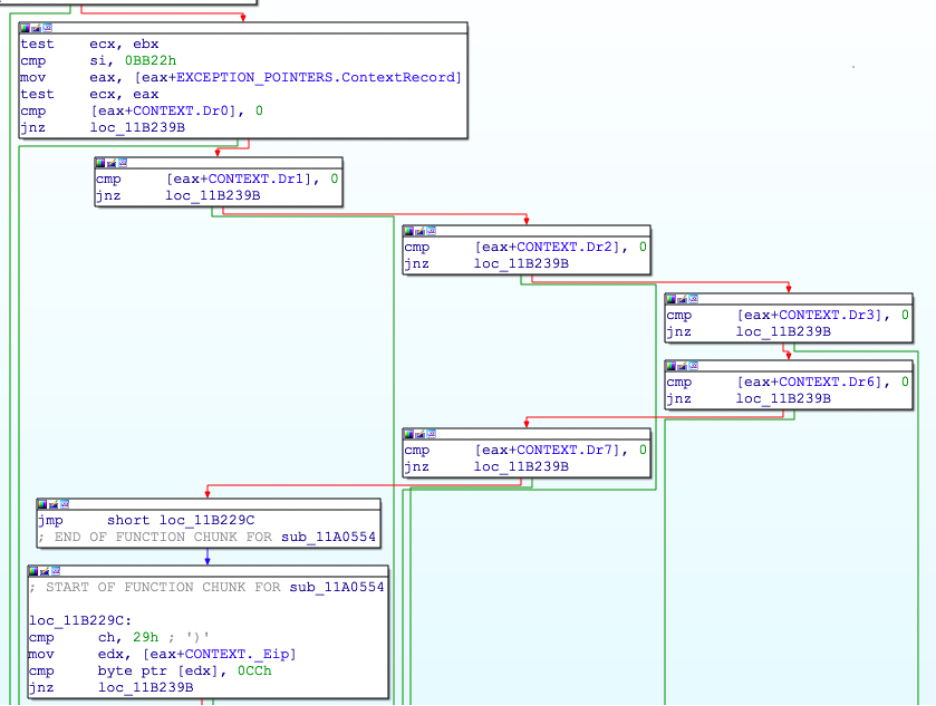 The EIP, where the exception happened, is compared against byte 0xcc, i.e., the software break point. This is a necessary condition for the exception to proceed and to generate the next EIP.

The EIP is calculated relative to the place where the exception occurred: 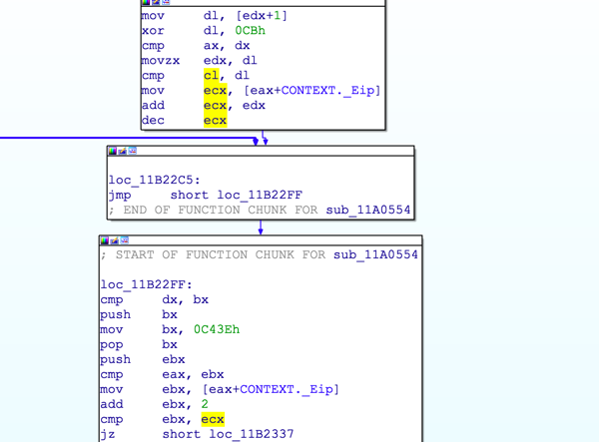 The byte after the exception EIP is XORed with 0xcb, and the result is added to the current EIP to get the next location for execution. The instruction in between the exception EIP and the calculated EIP is filled with junk instructions to confuse the disassembler, as illustrated below:

The manual dissection of GuLoader payloads becomes a cumbersome and tedious process due to the presence of all the various hardcore anti-VM, anti-analysis, and anti-debug mechanisms. Therefore, it is imperative to automate this extraction. To make the process successful, we must first automate the dumping and then write a script to extract the parameters necessary to get the URL out of GuLoader.

But GuLoader presents us with a big hurdle, i.e., the anti-dumping protection. This is a technique used to prevent reverse engineering and analysis of the code. It works by encrypting or obfuscating the code, making it exceptionally difficult to read and understand.

GuLoader encrypts the main binary code at any point in the calling of any system API, which invariably makes the dumped code useless. The following two images depict “XORing the code before the call” and “deXORing after the API call”, respectively. 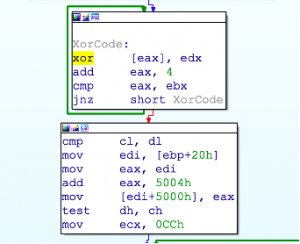 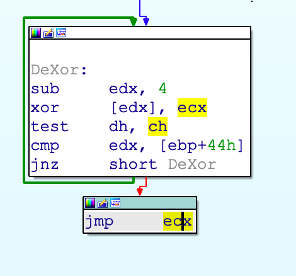 A weakness you can exploit is the initial API call made by GuLoader, which is not wrapped in the subroutine that does all the aforementioned “anti “checks. 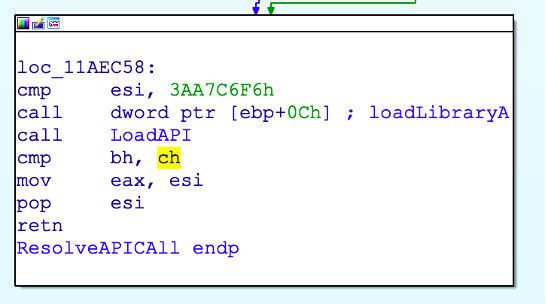 To exploit this weakness, you can set up a DLL hook after OEP is reached, as shown in the code below: 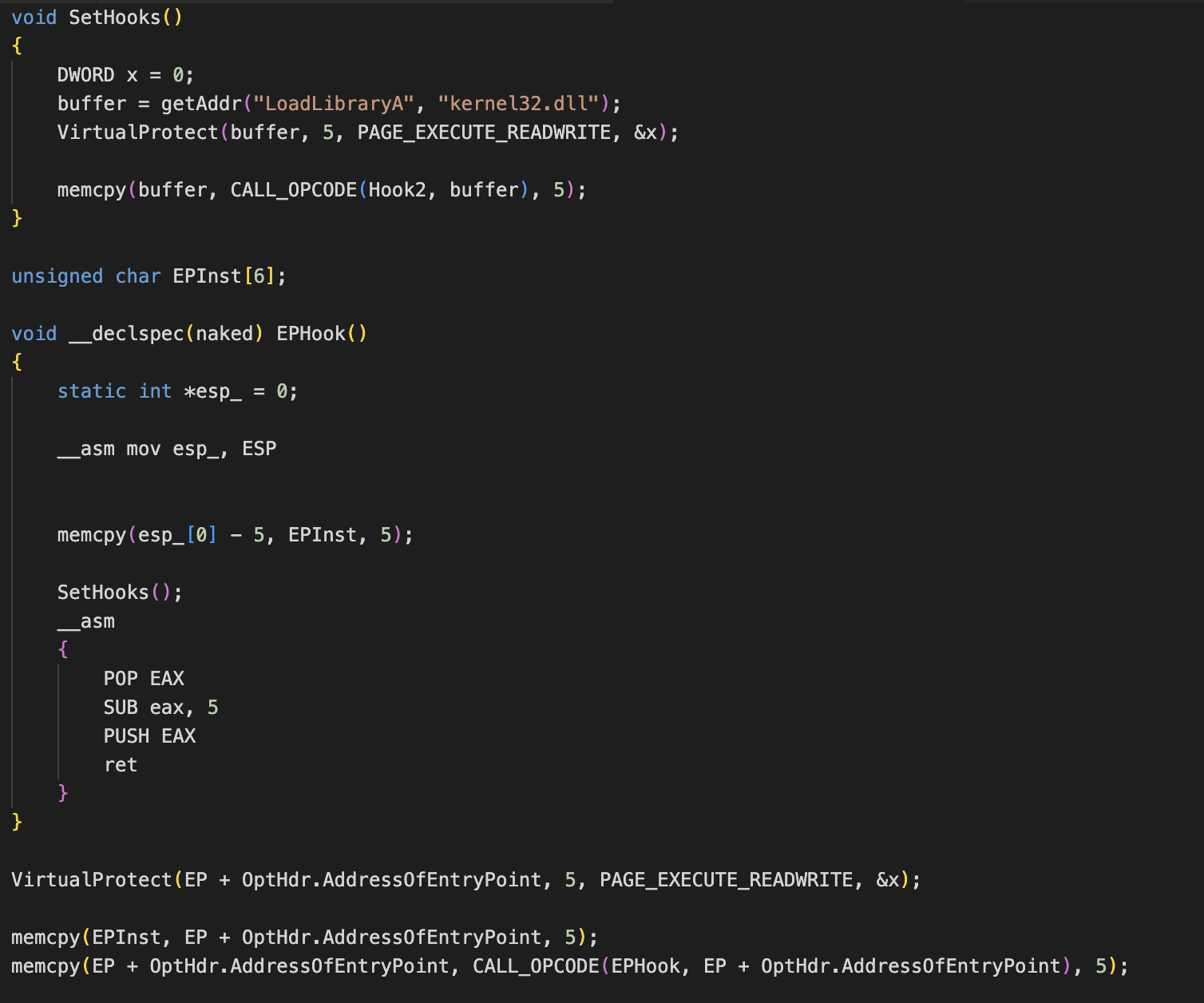 Once the dump is successful, we have to locate the key. This process is reasonably straightforward, as GuLoader encrypts the botnet command and controller (C&C) with the same subroutine as the strings. Here’s the string decoding subroutine: 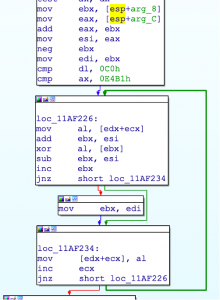 The interesting pattern to observe is how the parameters are supplied to the subroutine; being a subroutine with __stdcall calling conventions, the stack is cleaned by the called function, but only three parameters are pushed onto the stack.

Tracking back, we can observe that the key parameter is pushed using a direct call opcode. That’s precisely the location of the XOR key to be used.

Once you have extracted the key, you can easily brute force for the presence of URLs in the memory dump using the following code: 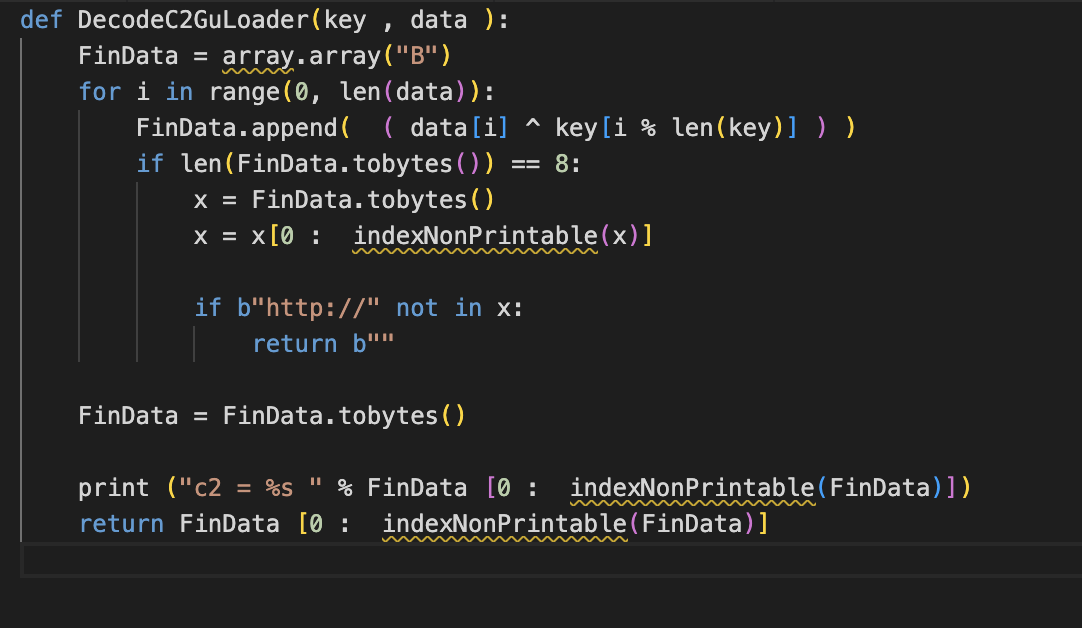 The output will be:

As is evident from what we’ve discussed, GuLoader is challenging to detect and remove and can pose a severe threat to both individual users and organizations. There are several ways to protect against GuLoader, most of them are IT basics – but sadly, the basics often get missed:

To see what malware families our researchers are currently observing in our botnet command and controller (C&C) report, visit our Botnet Quarterly Update.