The value of Hash Blocklists

Hash blocklists focus on email content.  They help you filter malicious email from large ISPs that can't be filtered by IP or domain blocklists. Additionally, they can be used to block emails containing malware files and cryptowallet addresses.  Here's how they work, and the value they bring to your email security infrastructure.

IP & Domain Blocklists (DNSBLs) are very effective at filtering malicious emails. However, they do have one big limitation: How do you block an email sent from a compromised account at Gmail, Hotmail or any other large email service provider (ESP)?

You can’t block all email from these ESPs. But, by creating a hash of a compromised email account, emails from the hacked account can be blocked, while protecting the privacy of its owner. Additionally, this approach can be expanded to cover other areas of concern.

Users have seen >30% of spam messages being caught by this blocklist alone – with one customer confirming it detected 873 mails with Bitcoin fraud in less than 2 weeks! When applied correctly during the post-data phase, it can be a powerful asset to protect your mail stream – so let’s take a look at how it works in more detail.

How do you block emails from compromised accounts belonging to large email service providers?

Let’s imagine a case where Vicky’s Gmail account is compromised. An attacker can use Vicky’s credentials to send an email message coming directly from Vicky. The usual ‘hooks’ used in email reputation systems won’t work because the message is coming from Gmails’ server, a legitimate server providing services to millions of people. Reviewing the reputation of the sending IP address won’t help, nor will the sending domain.

However, when Spamhaus assesses an email account to be compromised, we will associate a hash to that specific email address. This allows users to query the HBL and block emails that are coming from that hacked email account, that otherwise would have gone undetected.

How does a Malware Hash Blocklist work?

Similarly to a malicious email address, where we have seen a file to be associated with malware, we assign that file with a cryptographic hash. So, even if no malicious IPs or domains can be associated with the email message containing the malware file, the Malware HBL can be queried for that hash in the “file” context. The Spamhaus HBL return codes will tell you one of two things:

A malware file can have a hash associated with it and be listed on the Malware HBL within only 30 seconds of detection. This is as a result of our researchers’ advanced collection and agile dissemination methods.

How does a Cryptowallet Hash Blocklist work?

Think of the “sextortion” scam emails, which are currently so prevalent. You know the ones – they look something like the one below: 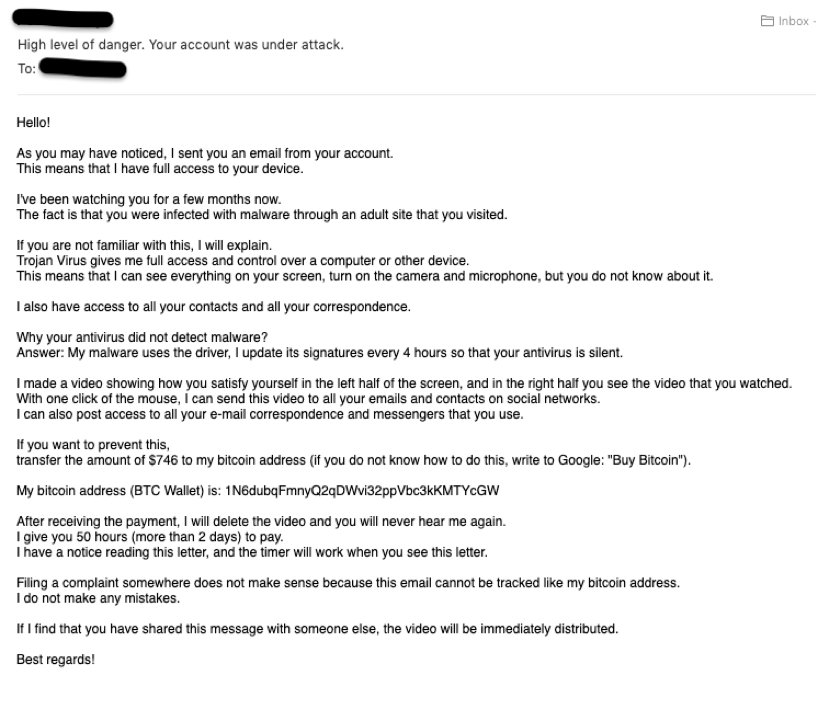 The sextortion email includes a bitcoin address of where the victim is to send money. Even if the sending email doesn’t trigger a rejection based on IP or domain reputation, the bitcoin address can be used to determine that the email is malicious in nature and result in the email being blocked anyway.

Virtually anything that can be extracted from an email message can be hashed. This data then can be used to create a new sub-list, thus increasing the number of reputational hooks available to you. The Spamhaus HBL helps postmasters and filtering software identify and block emerging threats now and, due to its extensible nature, well into the future.

Watch this on-demand webinar with Emanuele and Matt from The Spamhaus Project to learn how to increase your block rates, using content blocklists. These DNSBLs an help you block malicious email from large ISPs you previously wouldn't have been able to block.

Why you should use domain and hash blocklists

It's a well-known fact that filtering emails using IP blocklists (DNSBLs) blocks the vast majority of malicious emails. It's effective and economical, using minimal computational power. So why should you also use domain and hash blocklists for filtering?

As IT budgets and resources are squeezed it's understandable to shop around, be it for hardware, software, or threat intelligence data, for that matter. But beware...not all email blocklists (DNSBLs) are equal.